Note: all images in this article are courtesy of Singapore’s Smart Nation and Digital Government Office.

Singapore’s ambitions to become a Smart Nation have fueled massive national investments in facilitating digital transformation in every sector of the economy. To set an example for the nation, the Civil Service has had to lead the way in Smart Nation initiatives, especially in rolling out a ‘national digital identity’ platform for the public (SingPass and MyInfo) and corporate entities (CorpPass).

Still, in spite of decades of building an efficient, business-friendly bureaucracy, the spectre of global digital disruption has put new pressures on young leaders of Singapore’s public sector to spur paradigm shifts and embrace massive change from within.

Tan Kok Yam, Deputy Secretary, Smart Nation and Digital Government Office (Prime Minister’s Office), is a typical example of this new-generation of civil service leadership. In his keynote speech at the Amazon Web Services Public Sector Summit held on 25 September 2019, Tan outlined how previous organic growth in technological sophistication is now being multiplied by the maturing cloud. In his words, “public cloud is the key enabler” of the way the government hopes to run the country – not to just be technologically efficient and sophisticated, but in an intuitive way.

“Every country, every city, every society, every government will have a set of problems it wants to solve. How do we make the economy more productive? How do we create more jobs? Give people more opportunities to do what they want with their livelihoods? How do we be a better government, serve businesses and citizens better as the public sector?” asked Tan.

“This is what states do, this is what governments do: we build roads, we help to make sure that utilities are in place. What is the equivalent of utilities in the digital space?”

“The bottom two parts, the data of the individual, the identity of the individual, has to be done by the government – a trusted partner, a trusted broker, as defined by us. We collect this data for regulation and to provide services — this is government-verified data and identity,” explained Tan. But how the data is to be accessed with permission and consent, and the trusted services to be built on top of that data should be explored by the private sector.

What are some of the products that a citizen will see? SingPass allows for one-click registration through MyInfo – a personal data platform enabled by the government. Instead of filling up a separate form for loan, credit card or insurance applications, the user simply gives permission to the government to be able to pass their data to the company that they want to transact with. For government services, this has been extended to the private sector as well.

“Delegation of authority is very, very important for us because we’re an aging society. We all have personal stories about how your old grandma or grandma needs to delegate authority to you. How do I negotiate that? We’re trying to put something in place,” he Tan reveals.

Wrapping Services Around the User

The goal is to remove the need for citizens to navigate the government bureaucracy. “Now, at the moment of the birth of a baby, you have to register him with immigration, receive a nice Baby Bonus from NSF, immunize him, hunt for childcare from the Ministry of Education. And you just want to do this with one app, which we call the Moments of Life.”

“It doesn’t help you give birth, but [it does] everything else.”

This concept is being extended to other Moments — the government has launched an Active Aging version of the Moments of Life in 2019, which is a one-stop shop to provide the individual with access to their own benefits and Active Aging programmes, targeted at the senior citizens.

The government is also applying the same idea to businesses. For businesses to operate, they need to register with ACRA, register with IRAS, and other bodies — and they want that to be done as soon as possible, because time lost in setting up a business means a delay in collecting revenue. Employment transactions, tax compliance, right down to closing companies: “we want to see if we can put that together and package it so that it’s easy to access for the company.”

At the policy level, Singapore’s leaders have come to the conclusion that the civil service needs to walk with every resident on the digital journey of living on the island. Digital lifestyles in Singapore should be a seamless, productive experience.

“We want to serve citizens and business from their point of view and not from the point of view… of the the 99 [public service] agencies,” says Tan.

The Cloud and Smart Governance

According the Tan, being a smart nation means “using tech to solve real world problems with the cloud to ground.”

At the back end of things, the same principles of sustainable digital transformation apply, exemplified by the acronym CODEX – Core Operations, Development Environment, and eXchange. Currently, most Government ICT systems are designed and built independently, with agencies each building to meet their respective requirements. This limits economies of scale, interoperability and agility. CODEX is a foundational shift away from this siloed approach.

“Really, what it means is to be able to build solutions better, cheaper and faster. I want to re-engineer my internal digital infrastructure. I want to be able to have a unified government data architecture to access the data, you want access to the information to be streamlined. You don’t want a case whereby, to start a data analytics project, you spend 7 months trying to organise the data and 2 weeks actually doing the analytics. You also want to have a unified government technology stack, so that analytics that have already been built can be applied across agencies, across other systems.”

“And finally, very importantly, being able to remove and purge the data sets when they are no longer being used. So we want to industrialise this process — to make this data life cycle as automated, as standardised as possible, both for innovation and to have a high level of data protection. We want to enhance compliance and cybersecurity by baking in security requirements and increasing and automating oversight in our systems.”

Overall, the wide availability of trusted managed services on the cloud helps to abstract away many of the complexities of the bureaucracy in making public services highly available. In turn, this abstraction allows more people at every level to be “developers” of better service, instead of high reliance on only the back-end developers to make positive change happen.

As DevOps gains prominence, developers at the back-end can leverage the iterative development capabilities and frequent releases to shorten deployment pipelines from hours to mere minutes, with no loss of service. Finally, the auto-scaling features of cloud architecture in turn help the public service sector increase interoperability, meet elastic demands in real-time while reducing incremental cost increases.

“And finally, very importantly, being able to remove and purge the data sets when they are no longer being used. So we want to industrialize, to make this data flow, data life cycle, as automated, as facilitated, as standardized as possible, both for innovation and to have a high level of data protection,” explains Tan.

“In this slide, it says that in the past, you had to go all the way from grey to middle blue, to light blue, to dark blue, if you’re developer. You had to look at all these things: provisioning, platform, orchestrating and so on. The technology stack ought to be able to reduce the developer’s workload, so that he focuses on what is at the front-end: on the solutions and applications,” explains Tan.

“I say [I want to] reduce the developer’s workload but actually that’s not true. I want the developer to continue to work as hard, on those parts, so that his output is multiplied by 10, 20 times.”

The Singapore government technology stack seeks to improve delivery, but technical compliance (security and policies) are hard-coded and standardized in a distributed manner.

According to Tan, cloud is the key enabler for resiliency and scalability. “You look at something like the national digital identity — we don’t actually know what scale it will be. In our wildest dreams, we want it to be adopted by everyone, everywhere; but we don’t actually know. We want the richness of the services provided by the cloud.”

To introduce new capabilities, new ways of working need to be enabled. And new ways of working, similarly, are compelled by the fact that these new capabilities exist. “By allowing for iterative development, we want to have the capacity to have continuous improvement of our apps. We want to be able to respond to citizen feedback, and be able to iteratively release so that our apps are always as good as they can be. And finally, using scalable architecture, we have the confidence of being able to build infrastructure that is elastic but resilient and reliable,” explains Tan.

The challenges along the way are manifold. There are significant challenges to the public sector. Migration to the cloud in itself is not a trivial task, having to move from traditional, legacy-based silo systems to the public cloud. Challenges include a new ways of operating — not just across agencies, but between the people who are operating the service and people who are developing the apps. It involves new forms of risk-management, acknowledging that the profile of the risk has changed.

“There’s always a ranking on which country is first, which city is first, but really, the best thing that cities, nations and governments can do is to learn from one another. We do try: we have a digital government exchange where we bring in CIOs of different countries to Singapore to have a discussion. We want to think of new ways of collaborating across borders, bringing countries together, sharing knowledge,” concludes Tan. 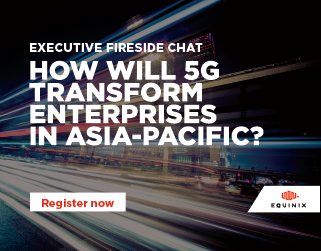 How incumbent banks can catch up with digital disruptors