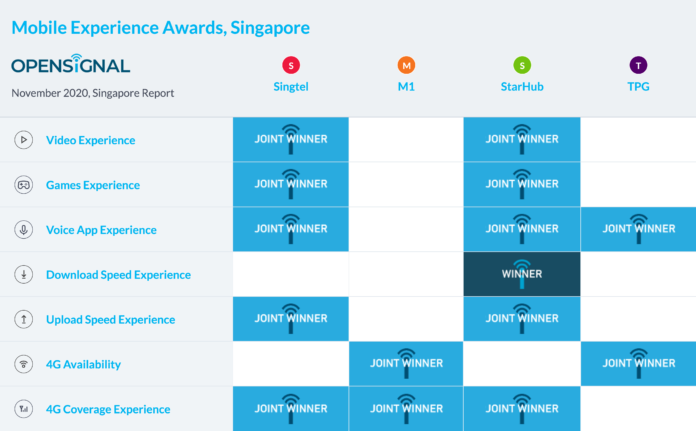 While the main three telcos in Singapore have been focused on the 5G race, new entrant TPG is making great headway in closing the gap for its mobile experience, according to Opensignal’s latest Singapore Mobile Network Experience report in November.

The latest report sees TPG tie up with M1 in the area of Video Experience and making significant improvements in its Download Speed and Voice App Experience.

In comparison, Opensignal’s earlier report in June found that TPG had a great deal of catching up to do in many areas of the mobile experience, as it placed last for all except one of Opensignal’s awards when compared to Singtel, Strahub and M1.

While TPG may have failed to obtain mid-band spectrum from the IMDA’s 5G Call for Proposal, the telco provider will be able to deploy 5G using 800 MHz of mmWave spectrum.

Although mmWave on its own is difficult to cost-effectively deploy across large areas due to its propagation characteristics, Singapore’s city-state status means that it is one of the best places in the world to deploy mmWave.

In addition, an operator’s need for spectrum is heavily influenced by the size of its customer base. If TPG has less users than its competitors (which is likely given that it is a new entrant), then it needs less spectrum to provide them with a good experience.

Opensignal’s Singapore reportexamines the user experience across 36,707 devices and more than 109 million measurements across Opensignal’s active userbase in Singapore, from  August 1 to October 29, 2020.