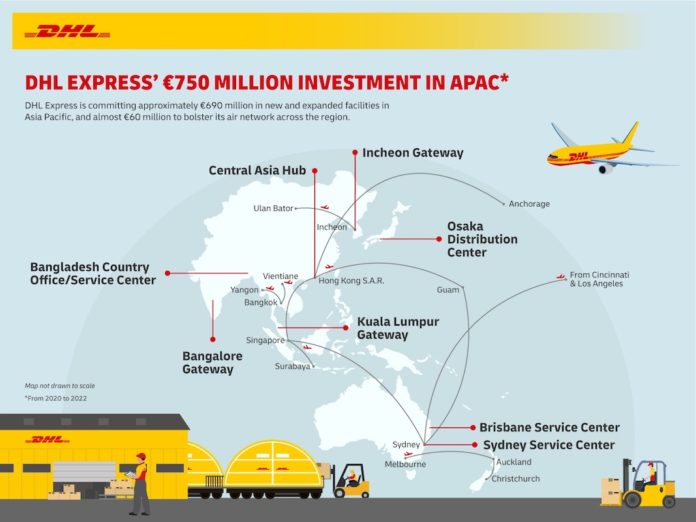 DHL Express is investing about 750 million euros (around US$888 million) between 2020 and 2022 to build or expand its facilities in key growth markets of Australia, Japan, Hong Kong and South Korea.

Also, the German courier service provider intends to spend close to $71 million to bolster its Asia Pacific air network such as introducing direct, new flight routes in Vientiane and Yangon as well as frequent flight routes in Oceania.

DHL Express expects shipment volumes in Asia Pacific to be 30% to 40% larger than last year’s peak season, which typically starts around November and lasts until Lunar New Year.

“These investments are crucial not only in the near term as we expect to tackle an unusually strong peak season, but it will make sure that we are well-positioned in the long run to keep global trade running as e-commerce and cross-border trade grow,” said Ken Lee, CEO of DHL Express Asia Pacific. “

Since the start of 2020, DHL Express has experienced a 50% surge in e-commerce shipments in Asia Pacific excluding China.

Included in the investment package is the $85-million Osaka Distribution Centre, which is scheduled to be opened by the end of 2020 and will be DHL Express’ largest distribution facility in the Japan.

The Central Asia Hub (CAH) in Hong Kong, one of DHL Express’ three global hubs, has a $447-million underway that will boost warehouse space by 50% to 47,000 square meters and increase the hub’s annual throughput to 125,000 pieces per day.

The company also plans a $155-million investment in a gateway facility in Incheon, Seoul. This  will boost shipment processing capacity in South Korea by approximately 160% and will be DHL Express’ largest gateway in Asia Pacific.

In Bangladesh, DHL Express is investing $30 million to build a new facility that will combine its country office and service centre into a 10,000 sqm site.

The new $47-million Kuala Lumpur Gateway in Malaysia, which is almost triple the size of DHL Express’ current facility, will increase the company’s processing capacity by more than 200%.

At the same time, construction of a new gateway facility in Bangalore, India is underway, slated to be ready by 2021.

DHL Express has significantly increased its number of dedicated flights to and from Australia to around 30 regular services per week, compared to 10 before the Covid-19 pandemic hit.

In September, the company launched its $37 million Sydney Service Centre, which is double the size of the previous facility. By end 2021, DHL Express will kickstart operations at the expanded Brisbane Gateway and Service Centre, in which the company will spend EUR $15.6 million to increase floor space by 148% and double its processing capacity. New and expanded facilities are also being planned for Melbourne and Adelaide in the near future.