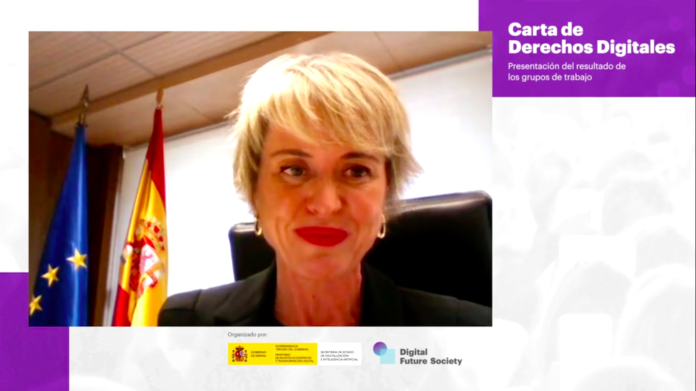 Spain has drafted a proposed framework — the Charter for Digital Rights — to become the first country in the world to guarantee the protection of citizens’ digital rights and, thus, “leading the debate on technological humanism in Europe and worldwide.”

Carme Artigas, the Spanish secretary of State for Digitalization and Artificial Intelligence, said this as she presented to the public the first draft of the Charter created with the aim of reinforcement the protection of rights and freedoms of the citizens in a changing digital environment due to the disruption of technological advance.

The presentation, hosted by the Mobile World Capital Barcelona through the Digital Future Society initiative, included  a debate between the experts who have drafted the initial Charter for Digital Rights, led by the Spanish government.

The Charter works as a prescriptive document, not regulatory, and proposes a framework for the public authorities’ action in a way that allows navigating in the current digital environment, taking advantage of all its potentialities and minimising its risks. It contributes to leading an essential and global process that guarantees a humanistic digital transformation, placing the people at the centre.

“The Charter is the result of an intense work of different actors, we have drawn the rights and freedoms that we want to debate, we make the first conclusions available to citizens now, already open for public consultation,” said Artigas. “We want this document to have the highest consensus.”

She said that the Charter accomplishes several objectives — reinforce rights, generate certainties and guarantee the citizens security in the digital environment.

“This document aspires to turn into an ethical framework for digital rights that will become an international benchmark for the rest of the countries with a transversal, holistic and humanistic vision; a national project which leaves no one behind,” said Artigas.

Cristina Colom, the Digital Future Society director, pointed out the need to promote a public-private collaboration in order to not only create new policies that address the digital future in a multidisciplinary and transversal way, but that these can be put into practice efficiently.

January 21, 2021
Realising that business transformation in the post-COVID world is inevitable, companies are turning to AI platforms and technology to accelerate their transformation. Beyond digital...

How the disposable nature of tech is putting your businesses data...