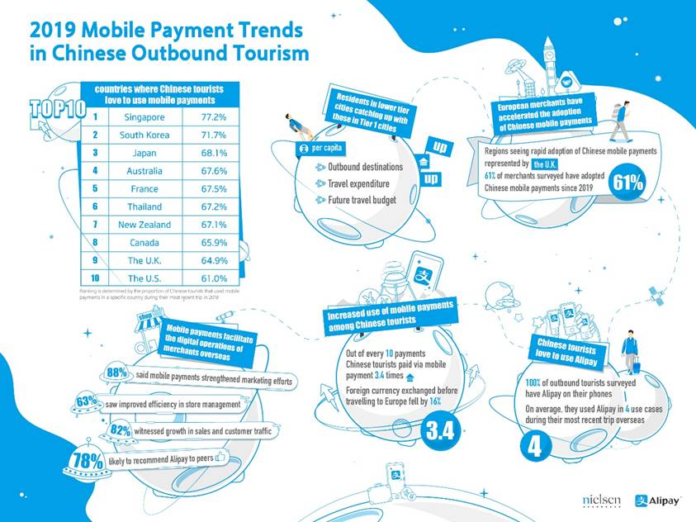 The Southeast Asia region maintains its leadership in mobile payment usage among Chinese tourists, with Singapore and Thailand positioned at No. 1 and No. 6 in the global ranking thanks to the region’s maturity in mobile payment solutions, according to a report from Nielsen and Alipay.

The report is based on a survey of 4,837 Chinese travellers and 547 overseas merchants.

Other countries on the list of Top 10 countries where Chinese tourists love to use mobile payments include South Korea, Japan, Australia, France, New Zealand, Canada, the United Kingdom and the United States.

In Singapore, almost all (97%) merchants indicated steady improvement compared to the previous year in terms of mobile payment usage and the amount of mobile spending by Chinese tourists.

Just under two-thirds (63%) of merchants surveyed in Singapore, South Korea and the UK said that they are likely to recommend Chinese mobile payment systems to their industry peers.

Among all the countries surveyed, the usage of Chinese mobile payment in Singapore, South Korea and Japan was highest, with Singapore in the leadership position.

The total amount spent by Chinese tourists increased by 14% in Singapore and Thailand and 23% in Japan and South Korea between 2018 and 2019.