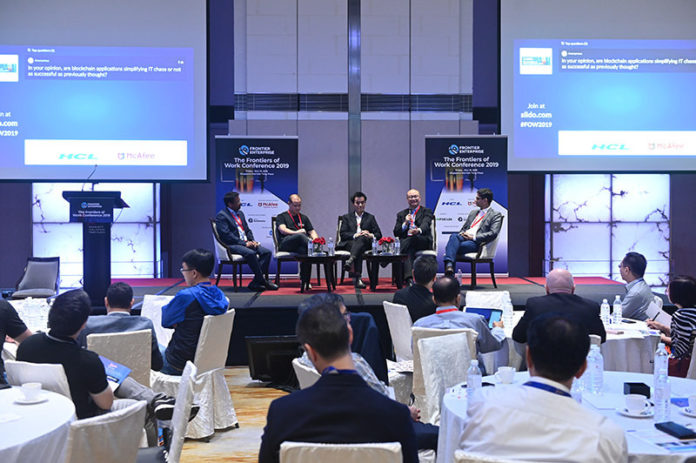 The chaos of employees installing their own tech is nothing compared to the chaos that digital disruption is wreaking on business models. Ironically, the same digital transformation initiatives that enable enterprises to weather that disruption also have the potential to not so much eliminate shadow IT as transform it into “organized chaos” that encourages bottom-up innovation.

That was a key takeaway from a panel session at Jicara Media’s inaugural Frontiers of Work conference in Singapore last week, led by Frontier Enterprise’s editorial team. The session, moderated by Frost & Sullivan’s APAC ICT director Krishna Baidya, featured panelists from a wide variety of industries: healthcare, automotive, insurance and logistics. It explored the chaos caused by the proliferation of dozens of IT systems being deployed internally to keep the lights on in the modern enterprise. However, the conversation quickly revealed that the panelists were more concerned with the chaos caused by digital disruption.

For example, Billy Cheng, head and GM for IT and business process at automotive group Cycle & Carriage, talked about the various disruptions upending the retail auto business – from electric vehicles and connected cars to direct-to-consumer online car sales and mobility as a service – and what his company’s role will be in that value chain three to five years from now.

“That is chaos, from where we see ourselves today, which is why we need to change the mindset of the organization,” Cheng said.

Arvind Mathur, CIO at Prudential Assurance, said his company has been facing its own disruptions, and made the decision early to turn those disruptions into opportunities instead of being destroyed by them.

“The first thing we did at least was make it clear to everyone that this is the reality now, so enjoy it – don’t resent it, don’t be in denial,” he said.

“Once you get comfortable with that, then you need to build a number of other disciplines which allow you to take advantage of the chaos and turn that into an opportunity.”

Mathur cites the example of processing health insurance applications, which can take from two to four weeks, which is unacceptably slow in these days where consumers increasingly expect the whole process to be approved as soon as they sign the application.

“To make a change like that, it is not just putting an IT system in place which makes things go faster,” Mathur said. “We have to totally change the way the products are structured and configured. We have to change the way our agents go and have conversations and what questions they ask, and we have to put in an AI-based risk engine, so that based on every question that you ask, the next question is helping us understand the risk in real time.”

We’re all in IT now

Making this happen required breaking down silos across the organization to enable it to reorient on customer journeys. That’s key to the shadow IT question because those departmental silos and accompanying mindsets have been what make shadow IT possible and hard to detect in the first place.

Employees typically deploy their own IT solutions because the IT department is too slow or bureaucratic to address their department’s specific pain points. Bruce Leong, director of technology and strategy at Mount Alvernia Hospital, said that digital transformation presents an opportunity for employees to become more actively involved in the company’s IT roadmap.

“Whoever is driving digital transformation in the organization – the CTO, the CIO, the CEO – needs to talk to the different departments and ask them to explain their pain points, and to get them involved in the technology part of it – don’t just leave it to the IT department to sort it out and impose a solution,” Leong said.

It’s also an opportunity for IT to educate them on technology solutions they may not have thought of and how it can help them, Leong added.

“The difference between pre- and postdigital is not how good the technology is – it’s how well the business leaders understand how technology works and what advantages it can give to their businesses. That’s the key difference,” he said.

In other words, in a postdigital business, C-levels will understand the company’s technology needs to the point that shadow IT won’t be necessary. In which case, Mathur adds, employees should actually be encouraged to take the initiative on finding and deploying IT solutions they can use – albeit with one important caveat.

“If it touches the core and can have architectural implications, then you need to partner with them,” he said.

Shaun Chong, co-founder and CTO of Ninja Van, said his organization is already encouraging employees to think up and share their own innovation ideas.

“If we always leave innovation to just IT, that’s where our organization might start to move a little bit slower,” he said. “What I like to see is innovation popping up from all across the organization. We use tools like Google Plus, where any employee in our organization can post suggestions, ideas, and anyone can pick it up.”

Also, he added, because Ninja Van builds its own IT systems, “everything revolves around APIs, so any employee who looks at a certain process can say, ‘Hey, maybe I can automate it or improve it – can I use one of the existing APIs in the company?’ We have a culture within the company where we share practices, we share coding lessons, and that’s something that has allowed us to move a little bit more rapidly.”

Chong admitted that as the organization gets bigger, it will have more structure and processes that will inevitably slow things down.

He concluded: “But there’s always this little bit of chaos within the organization that still allows you to jump ahead – what I call ‘organized chaos’.”