This latest round boosts the valuation of Fireblocks to $2 billion.

The Fireblocks platform propagates the expansion of digital asset use cases beyond bitcoin into payments, gaming, non-fungible tokens of NFTs, digital securities and ultimately allows any business to become a digital asset business.

The unicorn company’s technology can be white-labeled for crypto custody solutions, allowing new and established financial institutions to implement direct custody on their own without having to rely on third parties.

“Fireblocks is the preferred choice by large and small institutions given that its platform allows them to offer their customers’ custom custody solutions instead of outsourcing critical capabilities,” said MukayaPanich, chief venture and investment officer at SCB 10X.

“We are an investor, partner and customer of Fireblocks in multiple areas as we believe the Fireblocks Asset Transfer Network and its crypto custody infrastructure are world-class and are unparalleled in the digital asset space,” she said.

Now adopted by over 500 institutions and securing over one trillion dollars in digital assets, Fireblocks infrastructure has been a fundamental driver in the growth and adoption among new and traditional financial institutions.

Gupta said the secure storage and transfer of digital assets will be core to all of these businesses, and Fireblocks is positioned to become the infrastructure for companies to secure and move digital assets.

Since its inception in 2019, Fireblocks has raised a cumulative total of $489 million from the leading global VCs in the fintech, blockchain and cybersecurity space including Cyberstarts, Eight Roads, Tenaya Capital, Swisscom, Paradigm, Ribbit Capital, and Coatue.

Looking ahead into the growth of the industry, there is massive potential for us to continue stepping in and being a trusted partner to financial institutions and other organizations looking to enter the space safely and seamlessly,” said Michael Shaulov, CEO of Fireblocks. 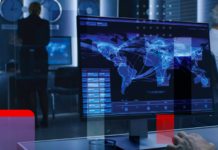