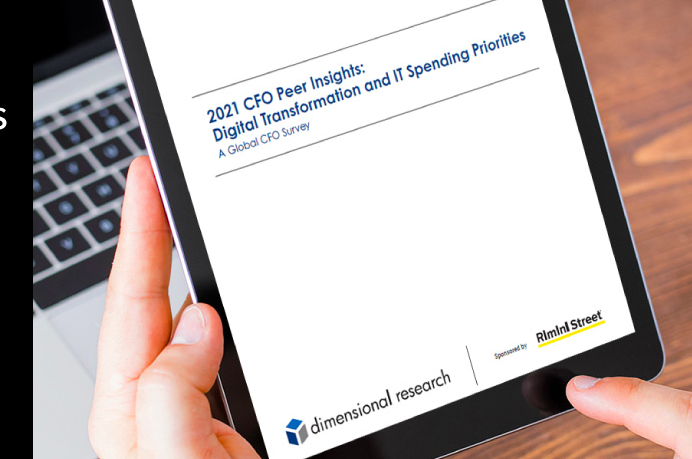 Three in every five (59%) CFOs globally say digital transformation (DX) is within the top three of their list of IT spending priorities, according a survey report from Rimini Street.

The report is based on a global online survey conducted by Dimensional Research, sponsored by Rimini Street and covering more than 1,500 CFOs or equivalent top finance professionals from 13 countries, including at least 100 who are based in Singapore.

Also, 71% of CFOs surveyed believe that DX investments are key to their company’s success and 77% said they would help the CIO find a way to fund a new DX project if the initiative delivered strong ROI.

In addition, 67% of CFOs say they “refuse to waste precious dollars on IT investments that don’t move the needle” and 70% say they want to cut spending on non-essential IT investments.

Four in every five (80%) of CFOs expect their technology spending to increase in 2021, among whom almost half (46%) say this growth in spending is being driven by new DX investments.

Almost three of every four (73%) CFOs indicated that the global pandemic increased their DX investment, and 95% agree that technology investments are key to recovering from the business impacts of the pandemic.

When asked about the type of IT projects they personally want to see more of from their CIO because they see clear business value and strong ROI, “optimising existing technology investments” topped the list with 44% of survey respondents.

Large technology investments that may not have a clear business case, such as some vendor-forced ERP migrations and upgrades, may be better deferred or avoided and instead ERP systems can be optimised through strategies like third-party support, enabling the CIO to free up IT resources to help accelerate DX programs.

In addition to providing a clear business case on new transformation projects, CFOs also expect the ROI on technology spending to be swift, with 46% of CFOs expecting to see ROI on their technology investment within two years, and the vast majority (82%) within three to five years.